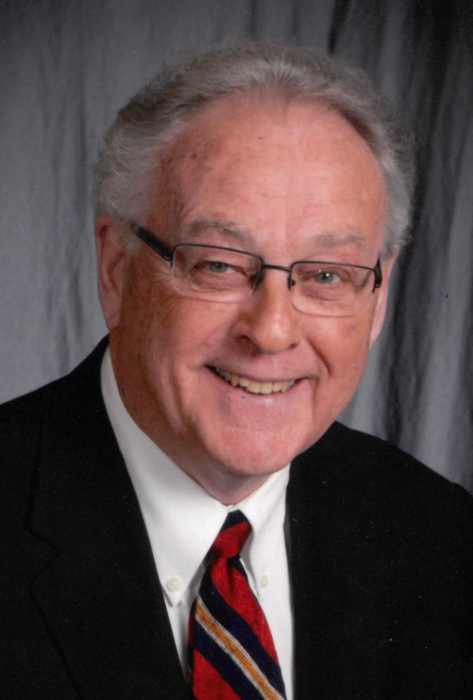 Thomas M. Paulson, age 80 of Austin, Minnesota, passed away peacefully at his home surrounded by loved ones on Monday, December 23, 2019 from complications of congestive heart failure. He was born on November 15, 1939 in Garner, Iowa to Melvin and Agnes (Miller) Paulson. They moved to Austin when Tom was nine. Tom graduated from Austin High School in 1957 and then attended Austin Junior College. On March 3, 1958, he married Phyllis Christofferson in Austin. Together they raised four children. Tom then began a 40-year career with Hormel Foods starting as a foreman and moving into sales. He held sales positions in Florida, Ohio, and Minneapolis. While in Ohio, Tom served as president of the Canfield Kiwanis Club and was involved in The Special Olympics Program. After retiring and returning to Austin, he was an active member of First United Methodist Church where he served as financial secretary for several years. Tom also served on the board of St. Mark’s Nursing Home. Tom enjoyed a second career serving as a funeral assistant for almost 10 years at Worlein Funeral Home. Tom enjoyed working in his yard which was pristine. He loved entertaining and cooking. He was especially known for his delicious barbeque ribs. Tom’s greatest joy was his family. He was so proud of his children, grandchildren, and great grandchildren. He will be missed by all who knew and loved him.

Funeral services will be held at 11:00 a.m. on Friday, December 27, 2019 at First United Methodist Church in Austin. Visitation will take place from 9:00-11:00 a.m. prior to the service at the church on Friday. Interment will be in Oakwood Cemetery, Austin. In lieu of flowers, memorials can be given in Tom’s memory to Mayo Clinic Hospice Austin, 200 1st St. SW. Rochester, MN 55905. Worlein Funeral Home of Austin is assisting the family with arrangements. Condolences may be expressed to the family online at www.worlein.com.

To order memorial trees or send flowers to the family in memory of Thomas "Tom" Paulson, please visit our flower store.