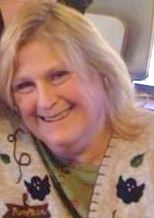 Suzette Dawn Loverink-Wilde, 62, of Lyle, MN went to be with the Lord on September 18, 2019. Suzette was born October 20th, 1956 in Austin, MN to Harm and Lola (Culbert) Loverink. She graduated from Lyle Public School in 1975. Suzette married Bruce A. Wilde in Austin, MN on August 13th, 1976. They were married for 34 years later divorcing.  They lived in Germany for two years later moving to London, then Austin and later settled in Lyle, MN. She was a firm believer in the lord and attended Grace and First Baptist church. Being a wife, mother, grandmother and great-grandmother brought Suzette happiness throughout her life. As a homemaker she enjoyed cooking, baking, sewing, gardening, writing poetry and stories, drawing and spending time with family and children. She loved to teach all the children crafts and how to bake since she worked magic in the kitchen. Suzette always knew how to make everyone around her feel loved, appreciated, and cared for throughout her life and will be dearly missed.

The family wishes to thank all of those who helped and spent time with Suzette throughout her life. A special thanks to Mary Rinaldi; Carol Anderson; and Ricky Matter.

Funeral services will be held at 11:00 a.m. on Saturday, September 28, 2019 at Grace Baptist Church in Austin with Pastor Devin Larsen officiating. Visitation will be held from 5:00-7:00 p.m. on Friday, September 27, at Worlein Funeral Home in Austin and will continue for one hour prior to the service at the church on Saturday. Interment will be in Grandview Cemetery, Austin, Minnesota. Worlein Funeral Home of Austin is assisting the family with arrangements.

To order memorial trees or send flowers to the family in memory of Suzette Loverink-Wilde, please visit our flower store.