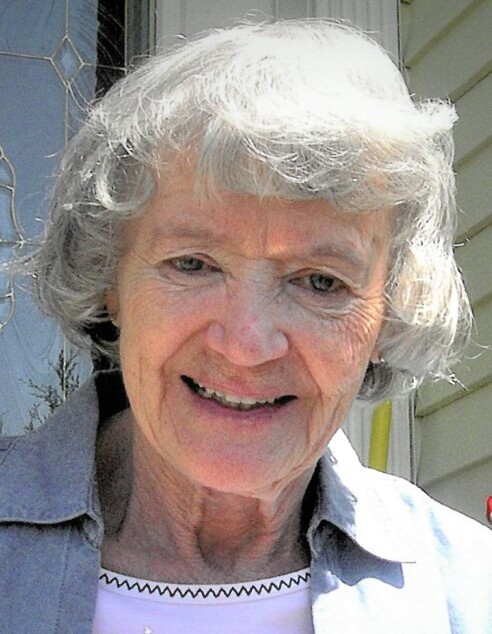 Sara Swanson, age 94, of Austin, Minnesota, passed away on Friday, July 9, 2021 at Good Samaritan Society – Comforcare in Austin. Sara Catherine was born December 5, 1926 at Lidgerwood, ND, to Joseph and Mabel Stine Saumweber. She was the youngest of four siblings, Joseph, Lola Mae, and Leslie. All are now deceased. The family moved to Fargo, ND when she was 1-year old.  She attended parochial and public schools where she graduated in 1944, with honors.  Sara worked as a school secretary until she married Robert N. Swanson of Detroit Lakes, MN, December 31, 1944. Their first child, Kathleen Jeanette (Vernon Lewis) was born Feb. 2, 1946.

In 1947 they moved to Minneapolis where they lived and worked at the Plymouth Gospel Mission. On Nov. 26, 1947, Rebecca Ann was born.  In 1948 the family moved to Anoka, while Mr. Swanson attended St. Paul Bible College. Sara worked as an office manager and reporter for the Anoka Herald. In 1951, Robert and Sara were called to their first pastorate, Pinewood Chapel, near Detroit Lakes, MN. Their third daughter was born Dec. 17, 1952, Mary Kay (William Ernst). In 1953, they were called to First Baptist Church in Detroit Lakes, where they served for 12 years. After that they served pastorates in Rothsay and St. Peter, MN. In 1972 they moved to Jackson, WY, where they established an interdenominational Christian Fellowship which they pastored for 14 years.

Sara lived a very busy life, raising three daughters, assisting and ministering alongside her husband in his pastorates, as well as occasionally working outside the home in various jobs, including real estate in Jackson. The family enjoyed traveling to over 40 states, camping and Rving. In retirement. Sara and her husband enjoyed 3 cruises, visiting family and friends, and going south for the winters! A life well-lived!

Old age and infirmities brought them back to MN to be closer to family. They moved to Austin in 2001. Rev. Swanson died Sept, 18, 2008. Since then, Sara has lived very independently in her home in Austin.  She attended Faith Evangelical Free Church, and had a vibrant relationship with her LORD and Savior, Jesus Christ. She was ready, eager to go home to Him and all her loved ones that have gone before. On Sept. 12th, 2020, her beloved daughter, Rebecca, passed away from a prolonged illness.  She is survived by two daughters, Kathleen Lewis (Vernon) of Austin, and Mary K. Ernst (William) of Andover, MN, 5 grandchildren, Ramona Colee (Cameron), Andrea Lewis, Rebekah Sundberg (Kevin), Laurie Krahn (Steve), Joshua Ernst (Laura), 3 great grandsons, Taylor Bond, Joseph Sundberg, and Brayden Colee, and 1 great, great grandson, Jackson Bond.

A memorial service will be held at 11:00 a.m. on Friday, July 16, 2021, at Faith Evangelical Free Church in Austin. Visitation will take place one hour prior to the service. Worlein Funeral Home of Austin is assisting the family with arrangements.

To order memorial trees or send flowers to the family in memory of Sara Swanson, please visit our flower store.