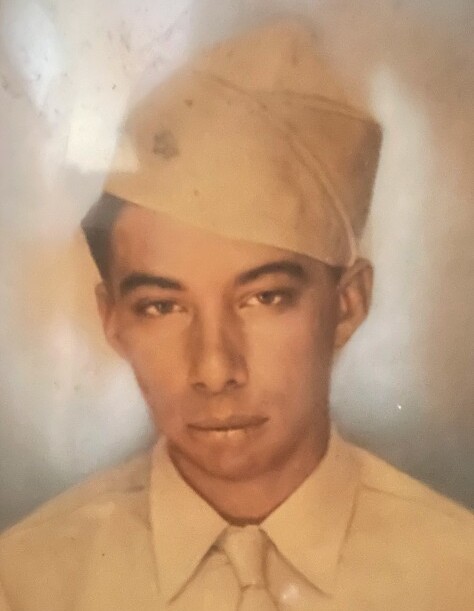 Reynaldo M. Salinas, age 95, of Austin, Minnesota, passed away on Sunday, July 25, 2021, at his home in Austin. Reynaldo was born January 29, 1926, in Yorktown, Texas, to Eufemio and Maria (Marmolejo) Salinas. He attended school in Texas. On April 21, 1944, he enlisted into the Unites States Army and served as a paratrooper in the 101st Airborne Division in the European Theatre during WWII. Reynaldo was a proud veteran and received two bronze stars during his time in the service. He was honorably discharged on June 7, 1946. Reynaldo married Guillermina “Maria” Reyes in 1955 in Yorktown, Texas and together raised nine children. Reynaldo worked many years for Elders Oil Tools in Texas. In 1990, the couple moved to Austin, Minnesota, where Reynaldo worked for Seneca Foods and the Aegean Cheese Factory.  Reynaldo and Maria enjoyed many trips to Texas and attending flea markets together. He was a member of the V.F.W. Post 1216, American Legion Post 91, and the Queen of Angels Catholic Church in Austin. Reynaldo will be fondly remembered and dearly missed by all who knew and loved him.

Funeral services will be held at 2:00 p.m. on Monday, August 2, 2021, at Worlein Funeral Home Chapel in Austin. Visitation will take place one hour prior to the service. A private interment will be held at Fort Snelling National Cemetery, Minneapolis.  Military honors by American Legion Post 91 and V.F.W. Post 1216. Services are prearranged and performed by Worlein Funeral Home of Austin.

To order memorial trees or send flowers to the family in memory of Reynaldo Salinas, please visit our flower store.