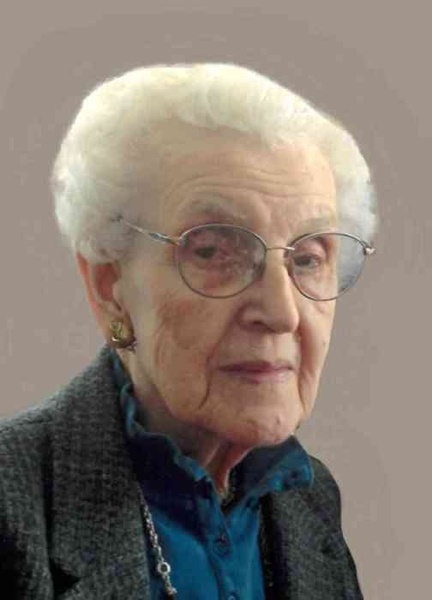 Mary Helen Schleicher, age 97 of Austin, Minnesota, died Tuesday, March 26, 2019, at Mayo Clinic Health System in Austin. She was born September 16, 1921, in Springfield, Illinois, the daughter of John and Lena Marie (Blase) Maslo. She was baptized October 16, 1921, and confirmed at Trinity Lutheran Church in Springfield. Following high school graduation, she attended Springfield Jr. College for two years, received her teaching degree, and then taught in Springfield. Mary’s mother regularly hosted Concordia Theological Seminary students at dinners in their home. Mary met Curtis John Schleicher at one of those dinners. On July 29, 1945, Pastor Curtis Schleicher and Mary Maslo were married at Trinity Lutheran Church, Springfield. Their marriage was blessed with five children. They served in Deaf Ministry, and in LCMS Lutheran churches in Sioux Falls, SD; Milbank, SD; and Austin, MN, moving there in 1968. Mary enjoyed her role as wife, mother, grandmother, and great-grandmother. She was an active pastor’s wife, directing Children’s Choirs, teaching Sunday School, VBS, and first-year Confirmation classes. At St. John’s Lutheran Church in Austin, she organized a large ministry of “Women’s Home Bible Studies.” She led and taught the groups’ leaders, who then taught the 75 women in the small-groups. Pastor Curtis Schleicher died on November 19, 1994. Mary continued every-week worship and participation in St. John’s activities until her health-changes in 2019. Besides the blessings of church-involvements, over the years she also enjoyed her personal Bible study, family times, cooking, reading, sewing, knitting, gardening, her children’s and community music performances, walking, golf, playing Bridge, watching the Minnesota Twins on T.V., and the daily phone conversations with one or more of her children. Mary will be dearly missed.

Funeral services will be held at 11:00 a.m. on Thursday, April 4, 2019, at St. John’s Lutheran Church in Austin, with Rev. John Schleicher and Rev. James Groleau officiating. Visitation will be held from 4:00-8:00 p.m. on Wednesday, April 3, at Worlein Funeral Home in Austin and will continue for one hour prior to the service at the church on Thursday. Interment will be in Oakwood Cemetery in Austin. In lieu of flowers, memorials can be directed to St. John’s Lutheran Church or recipient of donor’s choice. Worlein Funeral Home of Austin is assisting the family with arrangements.

To order memorial trees or send flowers to the family in memory of Mary Schleicher, please visit our flower store.