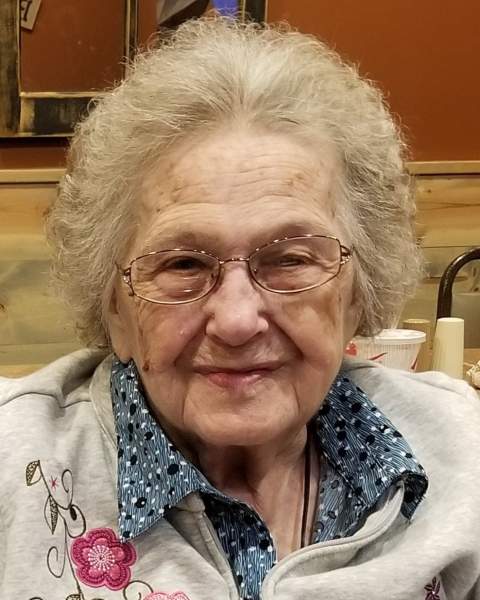 Lois Erna Emery, 100, formerly of Hayfield passed away on Wednesday, August 17, 2022, at her apartment at the Cedars of Austin, Minnesota, on her father’s birthday.

Lois Erna Hoffmann was born on November 18, 1921 in Willow Lake Township, Redwood County, Minnesota, daughter of Herman and Augusta (Wegner) Hoffmann. Lois was baptized in 1921 and confirmed in 1936 at Evangelical Lutheran Trinity Church-LCMS, Willow Lake Township. She learned her catechism in both German and English. In 1935, Lois graduated 8th grade at Redwood County Rural School #32. She then came to Austin to be a nanny for family friends. In 1942, during WW II, Lois became an employee of the George A. Hormel Company.

On November 15, 1942, she married Bernard “Bud” Emery at St. John’s Lutheran Church in Austin, and left employment shortly thereafter. Bud and Lois lived on various farms near Brownsdale, Sargeant, Elkton, and Taopi/LeRoy, Minnesota, and then settled on a farm near Hayfield, Minnesota. After Bud’s death in 1979, Lois continued living on their farm until 2017 when she fell and broke her hip.

Besides being a farmer’s wife and taking care of her five children, she was a caregiver to Bud until his passing in 1979.  Lois remained faithful to her God until the end.  She was a member of Trinity Lutheran, and was a member of the Ladies Aid and LWML. She helped cook and serve meals at church functions. She spent many hours cutting and sewing material to make quilts, which were sent to missions.

Lois could do almost anything. Lois loved to bake and cook. She always made double or more batches of cookies, pies, cakes, bread, rolls and buns. She always had food on hand in case family or friends came to visit. She made sure they never went home hungry.  Bud had a sweet tooth.  She loved working in her garden.  Throughout the years she canned vegetables, fruit and meat for family and friends. She continued gardening until about 2017. Lois was hard-working, probably due to Christian values and tasks learned at a young age from her parents whose ancestors came from Prussia.

Funeral services will be held at Trinity Lutheran Church of Waltham, Thursday, August 25, at 11:00 a.m. with Pastor Jesse Krusemark officiating.  Visitation will take place at Worlein Funeral Home in Austin, Wednesday, August 24, from 5:00-7:00 p.m., and one hour prior to service at the church on Thursday. Interment will be at Oakwood Cemetery, Austin. The church is handicap accessible.

Memorials can be made to Trinity Lutheran Church of Waltham.  Worlein Funeral Home in Austin is assisting the family with arrangements.

The family wishes to thank Trinity congregational members for picking up Lois at her home and taking her to worship services, and various church functions throughout the years.

To order memorial trees or send flowers to the family in memory of Lois Erna Emery, please visit our flower store.