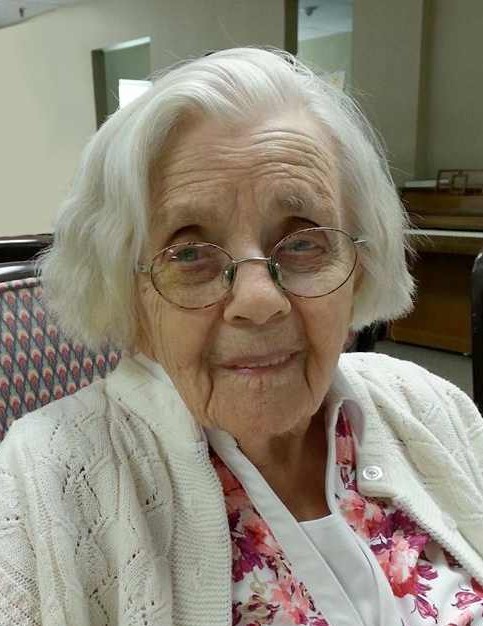 Leona Alpha Christianson was born on February 8, 1918 to George and Martha (Stoddart) Christianson in Freeborn County, Minnesota.  She grew up in the area on a farm and graduated from the Freeborn High School. Her first marriage was to Gail Larson. Together they had 6 children and were later divorced.  She married briefly again and had one son.  On July 20, 1962 she married Elmer Schwartz and they had 2 daughters. Together they raised their family in Austin across the street from the Crane Chapel Church until Elmer passed away in 2011. At that time Leona relocated to Northfield MN.

Family was important to Leona, she loved her role as a Wife, Mother, Grandmother. With a big family it wasn't always easy to balance everything but she tried to get to every special event the family had.  She enjoyed being around kids and young people. She often told us stories about growing up on the farm with her sisters and brothers- the work they did and how they got around. This included her early years on the farm with her young kids. She always liked spending time with her Grandchildren.

Her religion and church were important to her too. She really liked to participate in the different groups the church offered as well as volunteering for them.  She made a point to have a connection with the Pastors and people of the church. Much of the socializing she did was with the members.

Everyone knew Leona loved to sew. She would make clothing for her family and for other people or do alterations. She taught her daughters how to sew and in return her older daughters taught her how to quilt. In the early years she worked for the Singer Sewing Company, and later in a production room making drapes. She used this skill to help support the family. There were other jobs she had such as:  book keeper/secretary for the garbage company, a nurses aid for a nursing home, a project leader for the Cedarvale Company, cleaning houses, and she even owned a restaurant at one time.

Leona also enjoyed camping and traveling, the neighborhood  “Avon” coffee parties, playing cards with family & friends, gardening, house projects, and just being a part of the Austin community.  She rarely missed a day walking one of the many dogs she had over the years- even into her 90's.

It has often been brought up that one of the reasons Leona lived to 101 is that she was so tough and determined. But she also had a great passion for learning and wasn’t afraid to try anything new from making her own kitchen cabinets, making chocolates, or learning how to work a computer and send email. She was very curious and always active, enjoyed a good laugh or good prank- that probably helped too.

Besides being 101 Leona had a brain tumor that grew and caused a lot of the problems she had later on in life.  The tumor was situated on the part of the brain that controlled her behavior and actions. This at times was trying for those around her as her personality would change and cause outbursts. It did limit her ability to make new friends and socialize. Even with the tumor she still somehow managed to keep going and live a very independent life.

A lot happens in 101 years imagine what she has seen and been through. If you have stories to share with the family- we would love to hear them. Instead of flowers we would prefer donations be made to where she spent the last years of her life- Three Links Cottage East. They will go for needs the cottage has and part will go to the Activity Director so she can continue to do fun and engaging activities with the residents that live there.

Direct donations can be made online @  https://threelinks.org/giving/

Funeral Services will be held at 11:00 on Tuesday, February 26, 2019 at Crane Community Chapel in Austin with Pastor Dale Christiansen officiating.  Visitation will be held for one hour prior to the service at the church on Tuesday.  Interment will be in Grandview Cemetery, Austin, Memorials can be directed to the Three Links Cottage East in Northfield, MN.  Worlein Funeral Home of Austin is assisting the family with arrangements.

To order memorial trees or send flowers to the family in memory of Leona Schwartz, please visit our flower store.