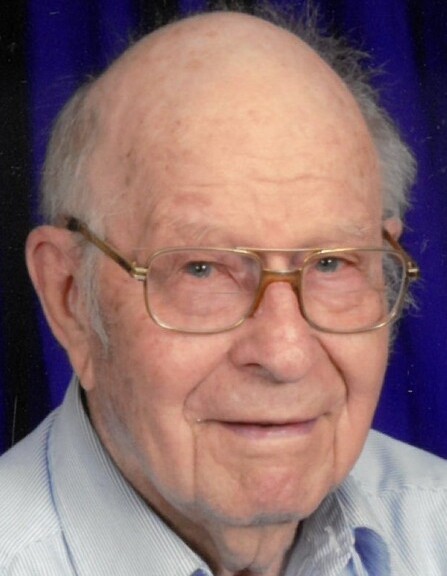 Lemuel James (Bud) Read, Jr. age 101 of Austin, Minnesota, passed away Sunday, July 4, 2021, at The Cedars of Austin. He was born January 12, 1920 at home on a farm near Swea City, Iowa, the eldest son of Lemuel and Hazel (Goodwin) Read. He was raised on farms near Swea City and attended school and graduated from the Grant Township School. He moved to Austin, Minnesota and worked for the Great Western Railroad during 1940-1942. He started working for the Hormel meat packing company in November, 1942.

Bud worked for the Hormel Company for nearly 40 years on various jobs, spending the last seven years of his career in the maintenance shop. He was active in St. Olaf church teaching Sunday School and the Bethel series. He also did wood working for the church and assisted in several remodeling projects. He made over 500 baptismal boxes given to children who were baptized at St. Olaf over a ten year period. He was also an experienced “lefse flipper” at the annual lefse making event.

Bud enjoyed woodworking, making numerous pieces of furniture for his children, grandchildren, and great grandchildren. He was active in the Sons of Norway and enjoyed traveling. Bud was a hard worker and could fix almost anything. During his later years he enjoyed reading, watching re-runs of Matlock, painting, and playing solitaire.

He was preceded in death by his wife of nearly 69 years; two infant children; grandson Scott Read; grandson Derek Read; his parents; brothers Henry and Kenneth; sister Evelyn; and half brother Allen Read. He had a good and full life. He will be missed by family and friends.

A funeral service will be held at 2:00 p.m. on Monday, July 12, 2021 at Worlein Funeral Home Chapel in Austin. Visitation will take place one hour prior to the service. Interment will follow the service at Grandview Cemetery, Austin. Mask’s will be required for services. In lieu of flowers, memorials preferred to St. Olaf Lutheran Church Revive Fund. Services are prearranged and performed with Worlein Funeral Home of Austin.

To order memorial trees or send flowers to the family in memory of Lemuel Read, Jr., please visit our flower store.