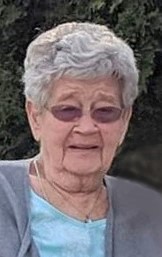 LaFaye M. Farrow, age 92 of Ellendale, Minnesota, passed away Wednesday, November 4, 2020 at Whispering Oak Place Assisted Living in Ellendale. LaFaye Muriel Hegna was born August 9, 1928 in Hayfield, Minnesota, to Oscar and Fern (Petersen) Hegna. She attended Hayfield High School and graduated in 1946. In 1948, she married Stanley Johnson. Together the couple had four sons. They later divorced. LaFaye then married Lerald “Larry” Farrow on May 29, 1971, at the First Lutheran Church in Blooming Prairie, Minnesota. In addition to being a homemaker, while her children were in school, LaFaye worked at the Owatonna Tool Company. She also worked at the Blooming Prairie Bakery. She served as a member of the V.F.W. Auxiliary, Eastern Star Auxiliary, and the First Lutheran Church in Blooming Prairie. LaFaye enjoyed traveling. She and Larry wintered in Texas every year and enjoyed the warm weather. The couple also loved traveling to Mexico and throughout the United States. She enjoyed playing bingo and many card games. Some of LaFaye’s favorites were playing 500 with her friends and Skip-Bo with her kids, who would always have to play by her rules. LaFaye was a wonderful cook and enjoyed cooking for a large group. Her specialties were lefsa, rosettes, krumkakes, and all kinds of Norwegian baked goods. She would always look forward to annual lutefisk dinners. LaFaye enjoyed caring for her garden and canning in the summer. She also liked feeding and watching birds, rummaging, and collecting turtle figurines.

To order memorial trees or send flowers to the family in memory of LaFaye Farrow, please visit our flower store.