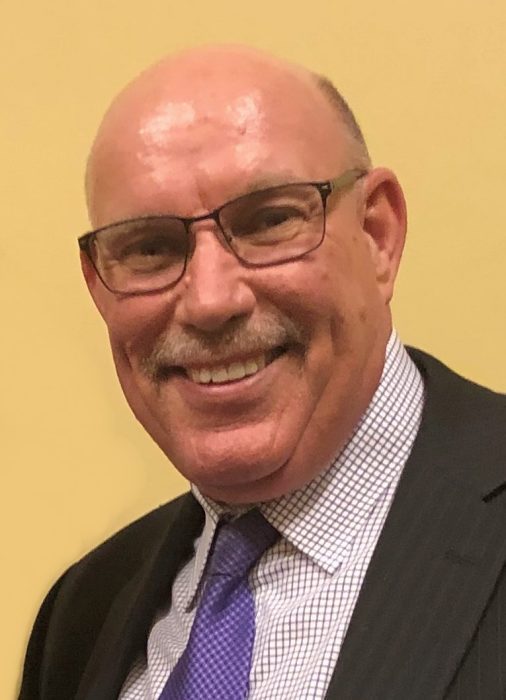 James “Jim” William Stough, age 62 of Austin, Minnesota, passed away peacefully Sunday, February 24, 2019 at Mayo Clinic Hospital Rochester, Saint Marys Campus surrounded by his loving family. Jim was born on June 6, 1956, in Jackson, Minnesota, to Roger and Shirley (Bechtel) Stough. He was baptized on July 6, 1956 and confirmed on May 24, 1970. He grew up and attended school in Estherville, Iowa, graduating from Estherville High School in 1974 and then attending Iowa Lakes Community College. Jim was employed at Pizza Hut as a store manager for five years before working for his father at Estherville Millwork.  On May 8, 1982, Jim married Terri Groninger at St. John’s Lutheran Church in Sherburn, Minnesota, the same church in which his parents were married. Together they raised two children, son Brian and daughter Kelsey. Jim went on to attend Worsham College of Mortuary Science, located in the Chicago, Illinois area, graduating in 1985 with a degree in Mortuary Science. He served his internship and continued to work at Henry-Olson-Fuhrman Funeral Home in Estherville, Iowa until 1989 when he went to work at Olson Funeral Home, which served several communities in the Fairmont area.  In July 2000, Jim started working at Worlein Funeral Home. He was a licensed funeral director in both the states of Minnesota and Iowa.  Jim was also a Certified Funeral Service Practitioner by the Academy of Professional Funeral Service Practice. He served the Austin community with involvement in the Austin Noon Lions, Austin Chamber of Commerce, serving as an Ambassador, a volunteer for the Freedom Festival parade, and on the 100 Club.  He was a member of the Austin Country Club and St. John’s Lutheran Church. In his free time, he enjoyed Green Bay Packer football, Hawkeye sports, sprint car races, golf, trips to Las Vegas, sampling craft beers, and spending time with his family. Jim will be remembered as a big presence who gave his all to his work and family. He will be dearly missed.

Funeral services will be held at 10:30 a.m. on Saturday, March 2, 2019, at St. John’s Lutheran Church in Austin with Pastor James Groleau officiating. Visitation will be from 4:00-8:00 p.m. on Friday, March 1, at Worlein Funeral Home in Austin, and will continue for one hour prior to the service at the church on Saturday. Interment will be in Sherburn Cemetery, Sherburn Minnesota. In lieu of flowers family prefers memorials be directed to recipient of donor’s choice. Worlein Funeral Home of Austin is assisting the family with arrangements. Condolences may be expressed to the family online at www.worlein.com.

To order memorial trees or send flowers to the family in memory of James "Jim" Stough, please visit our flower store.