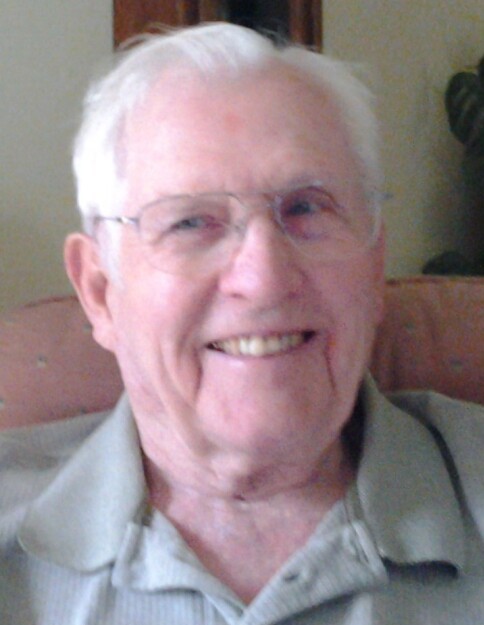 James M. (Jim) Fuller, age 97 of Austin, Minnesota, passed away Thursday, April 22, 2021 at his home in Austin. He was born on September 12, 1923, in Madison, SD, the second-born son of Harrison Fuller and Carrie (Reames) Fuller. When he was 18 months old, the family moved to Austin, MN, where his father found employment as a boiler-maker at the Milwaukee Railroad shop. Jim attended schools in Austin, graduating with the class of 1941. He was soon employed in the Hormel Office. He worked in both the Austin Plant Office and Corporate Office for a period of 41 years in middle-management positions. Jim met Shirley Farnsworth in the spring of 1942. They were married December 11, 1943, on a short leave from the U.S. Navy, where Jim served for three years during World War II. Upon discharge from the Navy, he returned to his job at the Hormel Office. They moved into a custom-built home in 1951, where Jim lived the rest of his life. During this period, all maintenance and many improvements were done by Jim with very little assistance. Their happy marriage was blessed with three children, Karel, Mark, and Brian. Jim and Shirley enjoyed music, dancing, and in particular, traveling. They visited all but two of the fifty contiguous states and made several foreign trips. The entire family participated in many of these trips. It was on a vacation trip through Ohio in October 1988 that Shirley was killed instantly in an automobile accident, ending 45 years of a very happy marriage.

Jim had many interests in his lifetime. In the 50’s he assembled high-fidelity/stereo components and built custom cabinets for them. He was a woodworker and antique restorer. He collected, repaired, and restored antique clocks and was one of very few repairmen in the area for years. At one time his collection numbered 65 restored clocks. He formed a retired Woodworkers’ Club in 1989. The club disbanded in 2017 at which time Jim was the only living member of the original 12. He became interested in Early American patterns and elegant glassware, acquiring over 500 pieces in his collection. In 1996 he wrote a 167-page autobiography for his family.

In his lifetime Jim volunteered for several local organizations. He was a member of Queen of Angels Catholic Church, the American Legion for over 70 years, Elks Club, and the Golden “K” Kiwanis Club. While president of his Kiwanis Club, he volunteered the Club for a daunting task-the first restoration work on the Paramount Theater, which involved the removal of all the modifications made by its second owner who had converted the theater into a disco club. It required hundreds of hours of labor but saved the new owners a considerable sum. His other volunteer work included 14 years as an AARP tax aide, more than 20 years as a Hot Meals on Wheels driver, and a Red Cross blood drive donor for over 45 years. He was also a YMCA member since 1986, attending exercise classes regularly. For many years he was treasurer and head of the reunion committee for his high school class of 1941.

Jim was active, energetic and outgoing, and he thoroughly enjoyed people. He will be remembered for his delightful sense of humor and his genuine interest in all whose lives he touched. He had a way of making everybody feel special, and he will be sadly missed by his family and many friends.

He is survived by his three children, Karel (Jim) Riley of Austin, Texas, Mark (Leslie) Fuller of Eden Prairie, Minnesota, Brian (Betsy) Fuller of Marquette, Michigan; he leaves six grandchildren and three great grandchildren; also, one niece, four nephews, including William (JoAnn) Fuller who has been a great help to Jim in recent years. He was preceded in death by his parents, Harrison and Carrie Fuller; wife, Shirley Fuller; brother, Robert Fuller; and special friend, Beverly J. Anderson.

Services are pending with Worlein Funeral Home of Austin.

To order memorial trees or send flowers to the family in memory of James "Jim" Fuller, please visit our flower store.