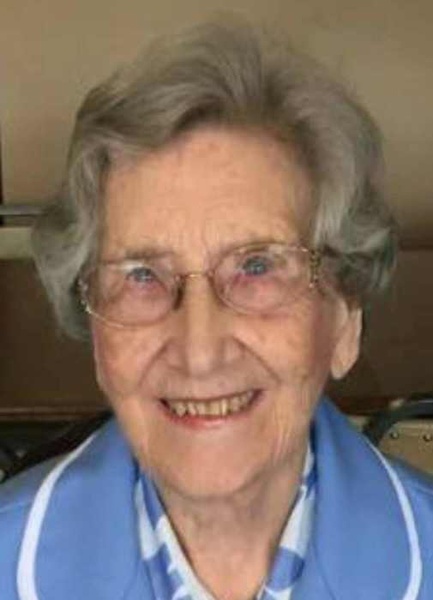 Irene Ella Thompson, age 105, of St. Ansgar, Iowa passed away peacefully Friday afternoon, January 24, 2020, at Good Samaritan Society in St. Ansgar, Iowa surrounded by her loving family. Irene was born August 18, 1914, at the farm near St. Ansgar, Iowa to Gustave and Alma (Schmidt) Feldt. She was baptized at St. John Lutheran Church and confirmed in the Lutheran faith in Grafton, Iowa. Irene graduated from Carpenter High School in 1932. On March 21, 1937, Irene was united in marriage to Leland Ellingson during a double wedding with her sister Agnes, who married Leland’s twin cousin. They farmed the home Ellingson farm for 39 years. During this time, she was active in farming and in the Deer Creek Lutheran Church, directing choir, teaching Sunday school and she also played saxophone in the Grafton Lutheran Church Band. When they retired from farming, they built a new home on an acreage near Lyle, MN. Leland passed away in 1978. Irene then moved to Austin, MN and through the Sons of Norway Lodge, she met and married Charles C. Thompson on August 8, 1981. Through this marriage she became part of a large new family of 3 sons and 2 daughters, 13 grandchildren and 32 great grandchildren. Irene loved playing her saxophone in churches and nursing homes. She planted many gardens of perennials and vegetables and furnished flowers for church altars, weddings and other gatherings. Irene also enjoyed playing cards, dancing and Sons of Norway. Charles and Irene traveled extensively in the United States, Canada, Alaska and several times to Norway and other parts of Europe. The couple moved to the Cedars of Austin in 2009. Irene then moved to the Good Samaritan Society in St. Ansgar, Iowa. Irene will be dearly missed by all who knew her.

Funeral services will be held at 11:00 a.m. on Thursday, January 30, 2020 at Red Oak Grove Lutheran Church in rural Austin. Visitation will take place one hour prior to the service at the church. Interment will be in Red Oak Grove Cemetery. Memorials are preferred to donor’s choice. Services are prearranged and performed by Worlein Funeral Home in Austin. Condolences may be expressed to the family online at www.worlein.com.

To order memorial trees or send flowers to the family in memory of Irene Thompson, please visit our flower store.