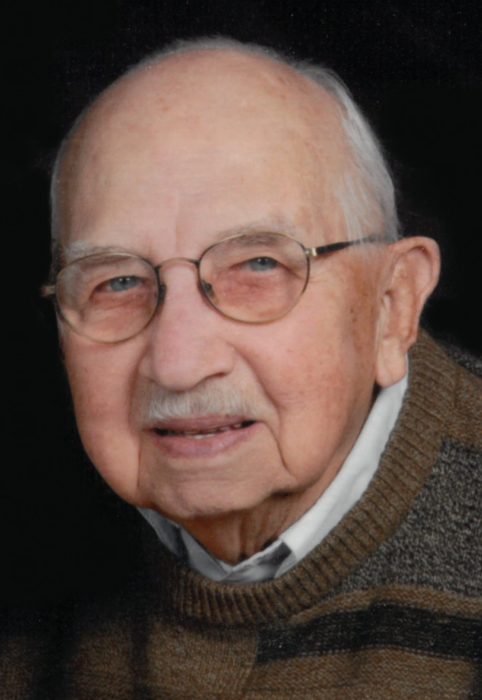 Everett G. Vermilyea, age 100 of Dexter, Minnesota, passed away Wednesday, May 15, 2019 at St. Mark’s Living in Austin. The son of Leland and Celia (Leach) Vermilyea, Everett was born on November 3, 1918 on the family farm one mile west of Dexter, Minnesota. In his youth he attended Dexter United Methodist Church, receiving a New Testament for perfect attendance in Sunday school in 1926. Everett attended Dexter Grade School through 8th grade, and then he attended high school in Elkton, Minnesota, graduating in 1936. When Everett was little his mother wanted him to play piano but he was not interested, he wanted to play the fiddle like his Grandpa Vermilyea. In 1936, he bought his first fiddle and took 7 lessons. Everett started farming in 1939. On November 22, 1945, he married Ann Vogelsang at St. John’s Lutheran Church in Elkton. To this union 5 children were born. Everett and Ann were married for 67 years. Along with farming, the couple bought the Dexter Hardware store in 1955. Everett installed many water systems and bathrooms over the next few years. In 1960, he closed the hardware store and kept the plumbing business. A lifelong member of the United Methodist Church in Dexter, Everett was very active at his church and was chairman of the building committee when the present church was built in 1966. He was also president of the Men’s Club and lay leader for 15 years. Music was always a great part of his life, he played in many fiddle contests and for many nursing homes. When Everett was 89, he formed an old-time band called, Three Old Boys with Arleigh Hanson and Earl Wieland. The band played in nursing homes and made a CD at this time. Everett was always thankful God gave him the strength and talent to play well into his 90’s. He will be dearly missed.

To order memorial trees or send flowers to the family in memory of Everett Vermilyea, please visit our flower store.