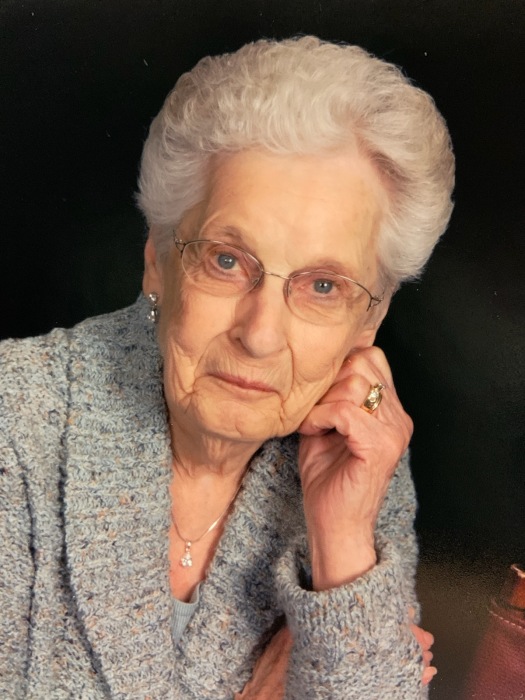 Elvina Leone Anderson, age 98, passed away on February 26, 2020, at the Heather Haus in Blooming Prairie, Minnesota.  She was born December 11, 1921, the oldest daughter of Fabian and Esther Sellman. Elvina and her two sisters were raised on a farm near Almelund, Minnesota, a small, Swedish community. After graduating from North Branch High School, she moved to Minneapolis where she attended the Minnesota School of Business and then worked at Land O’Lakes until she married Russell Anderson on October 15, 1949.  They lived in Almelund and raised two children, Beth and Bruce, while working at Farmer’s State Bank until their retirement in 1976. The next 25 years were happily spent as snowbirds in Texas during the winter and Minnesotans in the warmer months. Elvina enjoyed reading, puzzles, needlework, quilting, old time dancing, baking, cheering on her favorite team, the Minnesota Twins, and spending as much time as possible with her grandchildren and great grandchildren. For the last ten years she listened to hundreds of audio books due to her macular degeneration. After Russell's death she moved to Blooming Prairie, Minnesota, where her daughter lives and she has called that home for the past 6 years. She was a life-long member of Immanuel Church in Almelund where she was baptized, confirmed, married and now returns for her final rest next to her husband of 64 years.

We celebrate that she lived a long, healthy and contented life. A private, family celebration will be held at a later date.  In lieu of flowers she would encourage that any memorials be given to Immanuel Lutheran of Almelund. Worlein Funeral Home of Blooming Prairie is assisting the family with arrangements.

To order memorial trees or send flowers to the family in memory of Elvina Anderson, please visit our flower store.

Family to do services at later date