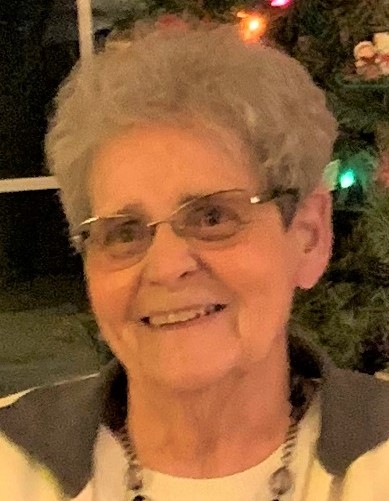 Deloris M. Glynn , age 82 of Blooming Prairie, Minnesota, passed away Thursday, October 14, 2021, at Mayo Clinic Hospital Rochester, Methodist Campus. Deloris May Proulx was born September 17, 1939, in Owatonna, Minnesota, the daughter of Edward and Jenny (Behrands) Proulx. She grew up in Owatonna and graduated from Owatonna High School in 1958. Deloris was united in marriage to Donald Glynn on April 20, 1963, at the Sacred Heart Catholic Church in Owatonna. Their union was blessed with four children. Deloris worked as a receptionist for Owatonna Tool Company until her first child was born and then became a homemaker. From 1980 until 1985, the couple lived in Arkansas before making their home in Blooming Prairie, Minnesota. Deloris was a lifetime member of the V.F.W. Auxiliary and in the 1970’s was president of the Irish American Club. Her hobbies throughout the years included watching birds, baking cookies and cakes, crocheting blankets, and watching soap operas. She was an avid fan of Elvis Presley, loved to go camping, and was always good at wrapping presents and had lots of tape. Above all she loved spending time with her family and friends. Deloris will be dearly missed by all who knew and loved her.

To order memorial trees or send flowers to the family in memory of Deloris Glynn, please visit our flower store.