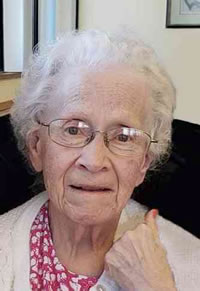 Delores M. Davis, age 89 of Austin, Minnesota, passed away Wednesday, January 16, 2019 at The Cedars of Austin. Delores Mabel Nelson was born on December 6, 1929 in Mower County to Charles and Theadora (Weiland) Nelson. She attended school in Brownsdale and Austin High School, graduating in 1947. She then received her teaching certificate and taught country school near Hayfield, Minnesota. Delores later worked in the dentist office for Dr. Huebner until his retirement. Then she worked for Dr. Schindler until his retirement. In 1952, she married Duane Foster. Together they had 2 children. The couple later divorced. In 1970, Delores married Vernon Merrell Davis at the Little Brown Church in Nashua, Iowa. She was a member of the Grace Baptist Church in Austin. Delores worked hard and did things well. She assisted in finishing her and Vernon’s home when it was being built. Delores also enjoyed cross stitching. She will be missed dearly.

Funeral services will be held at 11:00 a.m. on Monday, January 21, 2019 at Grace Baptist Church in Austin with Pastor Devin Larsen officiating. Visitation will be held for one hour prior to the service at the church on Monday. Interment will be in Greenwood Cemetery, Brownsdale, MN. Services are prearranged and performed by Worlein Funeral Home of Austin.

To order memorial trees or send flowers to the family in memory of Delores Davis, please visit our flower store.