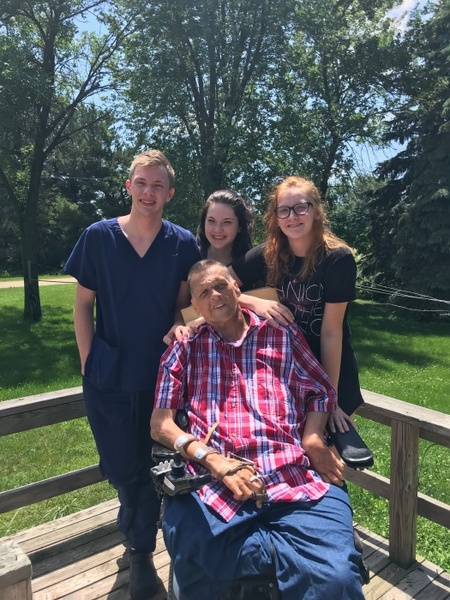 Daryl Craig Peterson, age 62, of Austin, Minnesota, passed away Sunday, March 29, 2020, at his home in Austin. Daryl was born to Marion and Gladys (Seavey) Peterson on February 5, 1958, at St. Olaf Hospital in Austin. He was baptized and confirmed at Red Oak Grove Lutheran Church in rural Austin. Daryl continued to live on the Peterson family farm his entire life. In August of 1975, Daryl was involved in a car accident, leaving him a quadriplegic, and still graduated with his class from Blooming Prairie High School in 1976. Daryl began farming and never let being confined to the wheelchair stop him. On June 29, 1991, he was united in marriage to Rae Ann Miner at the Red Oak Grove Lutheran Church. Their marriage was blessed with three children. Daryl fought to live and experienced many of the kids’ accomplishments, including watching them graduate. Daryl was a longtime and faithful member of the Red Oak Grove Lutheran Church. He also served on the Udolpho Township Board. Daryl’s lifelong passion was farming and conservation. He enjoyed collecting toy tractors, especially Farmall and Ford tractors. His family brought him much joy in life, and he loved spending time with them. He made an impact on the lives of those who knew him. Daryl will be dearly missed by all who knew and loved him.

A memorial service will be held at a later date. A private family interment was held in Red Oak Grove Cemetery, rural Austin. In lieu of flowers, the family would request that donations to local organizations be made in his name. Worlein Funeral Home of Austin is assisting the family with arrangements.

To order memorial trees or send flowers to the family in memory of Daryl Peterson, please visit our flower store.