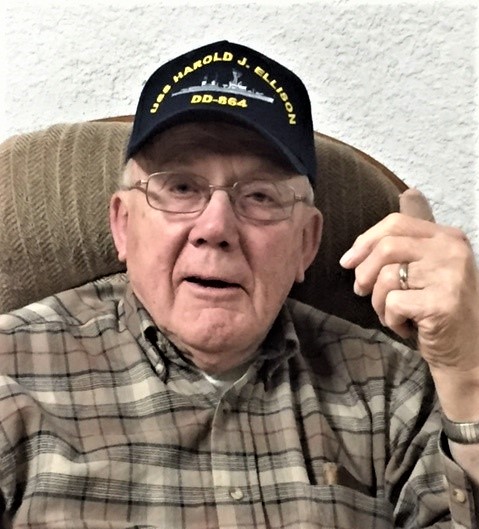 Darrell Marvin Erickson of Blooming Prairie, Minnesota, passed away peacefully on February 19, 2022, at Prairie Manor Care Center in Blooming Prairie. He was 89 years old. A proud Korean War-era veteran of the United States Navy, Darrell lived a long and full life, and was much loved by his devoted wife of more than sixty-three years, his two children and four grandchildren.

Darrell was born on December 15, 1932, in rural Gilmanton, Wisconsin, the only child of Leon and Julia Erickson. He graduated from Gilmanton High School on May 31, 1951, where he competed in basketball. In first grade Darrell thought he had a pretty good gig going, until his teacher expressed concern to his mother about his health - turns out Darrell had been skipping school to go fishing.

At the time of his high school graduation, the Korean War was raging. Darrell wanted to serve his country, and so in January 1952 he enlisted in the United States Navy. After barely three months of basic training, he was assigned to the USS Harold J. Ellison, a destroyer. He served more than three years of foreign service aboard this warship, primarily operating in the Mediterranean Sea, helping to keep the peace and protect American interests. He was advanced in rank to Electrician's Mate (Power) Third Class and was honorably discharged from active duty in January 1956. Darrell served four more years in the Naval Reserves, and received multiple medals in recognition of his service to the United States.

After his discharge, Darrell returned to Gilmanton and worked at Presto Industries in Eau Claire. He soon started dating the love of his life, Naomi Serum who he affectionately called "Toots." They were married in Modena, Wisconsin on August 16, 1958. After their wedding, Darrell moved to Blooming Prairie, as Naomi had started teaching at the elementary school. He worked at Associated Grocers for more than twenty-five years. Thereafter, he worked at Farmers & Merchants Bank until he retired.

Darrell was the most wonderful dad in the world. He meant everything to his family. Darrell was an outdoorsman. He loved fishing, snowmobiling, and deer, duck and pheasant hunting. He was an avid Green Bay Packers fan, and would often watch two football games at once on multiple TVs, and was also a huge Wisconsin Badgers football and basketball fan. Darrell enjoyed classic country music, especially Don Williams, and Christmas carols. He loved visiting the area in which he grew up, calling it "the boonies" and "God's country." Darrell and his family often would end up at the Whitetail Bar & Grill in Urne, Wisconsin, particularly on Memorial Day weekend. He typically gave the "thumbs up" sign when being photographed.

Darrell had a good sense of humor, was kind, easy-going, generous and patient. As just one example of his patience, he taught Julie and Jeff to fly fish when they were about 9 and 6 years old. Despite tangled lines, ducking for cover, and fish being caught and taken off hooks one after the other, Darrell maintained his composure and took it all in stride. He had a huge sweet tooth which was regularly satisfied with doughnuts, cookies and ice cream. He also enjoyed grilling, beer, brats, and salami and cheese and crackers. Despite being 100% Norwegian, he could not stand lutefisk. He did, however, love lefse with brown sugar and butter. Darrell was thankful and appreciative of everything in life, and always put his family before himself, especially his beloved Toots.

Darrell was a long-time member of First Lutheran Church, where he frequently ushered. He was a member of the VFW and the Snowdrifters Snowmobile Club in town. For numerous years Darrell and Naomi volunteered at the Senior Center every weekday, and frequently delivered Meals on Wheels. The two of them could regularly be found at "their" table at Casey's, eating and visiting with all who came into the store. They were referred by many as "the greeters." Darrell and Naomi were named Grand Marshals of the annual Fourth of July parade in 2012 in Blooming Prairie.

He is survived by his wife, Naomi Erickson; his daughter Julie Erickson of Eden Prairie; his son, Jeff (Kim) Erickson of Blooming Prairie; and his grandchildren Spencer (Alyssa) Toay of Maple Grove (Darrell was proudly awaiting the birth of his first great-grandson); MacKenzie Toay of Denver, Colorado; Eddie Erickson of Owatonna; and Thomas Erickson of Blooming Prairie, as well as nieces and nephews, and his special cousin, Joanne Erickson. He was preceded in death by his parents. A celebration of Darrell's life will be held at a later date. Inurnment with full military honors will be in Lyster Lutheran Church Cemetery in Nelson, Wisconsin. He will be dearly missed by all who knew and loved him. In lieu of flowers, the family suggests memorials to First Lutheran Church or the Blooming Prairie Cancer Group.

To order memorial trees or send flowers to the family in memory of Darrell Erickson, please visit our flower store.