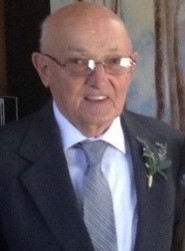 Curtis John Krebsbach, age 94 of Austin, Minnesota, passed away Thursday, August 13, 2020, at his home in Austin. Curtis was born in Adams, Minnesota, to William and Catherine (Arens) Krebsbach on June 21, 1926. He graduated from Osage High School in 1944. Following high school, Curtis enlisted into the United States Navy, proudly serving his country during World War II from 1944 until 1946. He then went on to attend Austin Junior College. In 1948, Curtis started his career with Hormel Foods in Austin, retiring in 1983 after 36 years. On August 1, 1953, Curtis was united in marriage to Joan Cady at St. Augustine Catholic Church in Austin. Their marriage was blessed with four children. He was a member of Queen of Angels Catholic Church and American Legion Post 91 in Austin. Curtis was an avid golfer and enjoyed going to dances, bowling, traveling, and was a car enthusiast. He will be dearly missed by all who knew and loved him.

A funeral mass will be held at 10:30 a.m. on Monday, August 17, 2020 at Queen of Angels Catholic Church in Austin. Visitation will take place from 9:30-10:30 a.m. prior to the service at the church on Monday. A private interment will be held in Minnesota State Veterans Cemetery in Preston. Services are prearranged and performed with Worlein Funeral Home of Austin.

To order memorial trees or send flowers to the family in memory of Curtis Krebsbach, please visit our flower store.