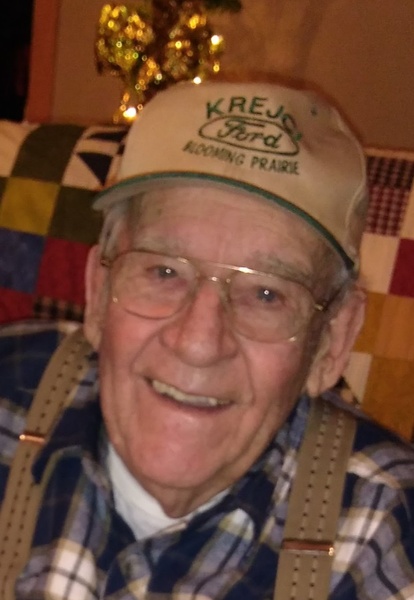 Charles “Chuck” Adolph Herdina, age 93, of Blooming Prairie, Minnesota, passed away Wednesday, June 22, 2022, at Prairie Manor Care Center in Blooming Prairie. Chuck was born on June 16, 1929, at home in rural Blooming Prairie Township to Adolph and Martha (Blazek) Herdina. He attended District 84 country school and graduated from Blooming Prairie High School in 1947. One of his proudest accomplishments was being a part of the undefeated Blooming Prairie football team. Chuck was an only child but grew up with his cousins who were like brothers and sisters to him. He and his cousins enjoyed many hours of hunting, fishing, and celebrating together. On July 2, 1952, Chuck married Betty Pribyl at Sacred Heart Catholic Church in Owatonna. From this union the couple was blessed with nine children. Chuck and Betty raised their children on the family farm outside of Blooming Prairie, which was established in 1892 and still exists today. Chuck spent his life farming up until his retirement. Farming was his greatest joy; he also loved to hunt, trap, fish, and enjoyed family genealogy – Chuck had put together over 50,000 family names. He also enjoyed following his children and grandchildren in their school activities and sporting events. Chuck was a member of St. Columbanus Catholic Church and a past Knights of Columbus and National Farmers Organization (NFO) member. Chuck was very proud of his family and all their accomplishments. His children were a great help and Betty was a very devoted wife, always helping Chuck whether it be on the farm or later as his caregiver. He will be greatly missed by all who knew and loved him. A special thank you to the staff at Prairie Manor and Mayo Hospice for his care over the past two years.

To order memorial trees or send flowers to the family in memory of Charles "Chuck" Adolph Herdina, please visit our flower store.