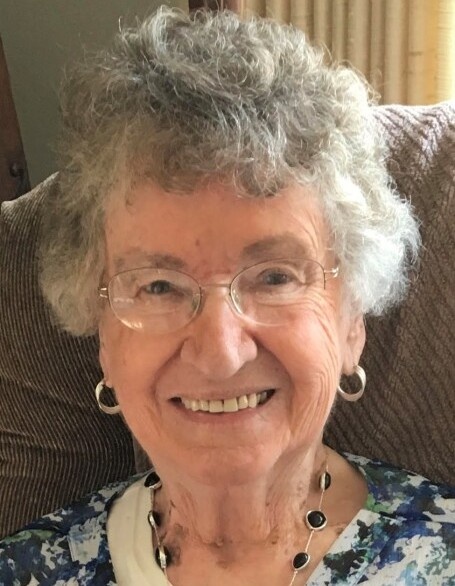 Arlayne D. Schauls, age 90, of Austin, Minnesota, passed away on Thursday, May 20, 2021 at Good Samaritan Society - Comforcare in Austin. Arlayne Dora Grimm was born September 20, 1930 in Braham, Minnesota, to August and Olga Grimm. She grew up on a farm near Mora, Minnesota and when she was 15, moved to Austin, Minnesota. Arlayne graduated in 1948 from Austin High School. She began working at Hormel Foods during her senior year and continued to work until she became a mom. Arlayne was united in marriage to Edward Schauls on May 7, 1950 at First United Methodist Church in Austin and together had two children, Cheryl and John. In 1962, she returned to Hormel and found her working in inventory control very interesting until her retirement in 1991. While Edward was still living, the couple enjoyed time with friends playing cards or listening to music at the V.F.W. and attending police functions. She was a longtime member of First United Methodist Church in Austin. Arlayne loved to travel, she visited many places including, New York, Hawaii, Alaska, and Mexico. Arlyane’s other interests included reading, knitting, and puzzles. Her most precious times were times spent with family, friends, and her 90th birthday “parade” during Covid was a special time in her life. Arlayne was well loved by many and will be dearly missed.

A memorial service will be held at 11:00 a.m. on Saturday, June 5, 2021 at Worlein Funeral Home Chapel in Austin. Visitation will take place one hour prior to the service. Interment will be in Oakwood Cemetery, Austin. Memorials are preferred to recipient of donor’s choice. Services are prearranged and performed by Worlein Funeral Home of Austin.

To order memorial trees or send flowers to the family in memory of Arlayne Schauls, please visit our flower store.