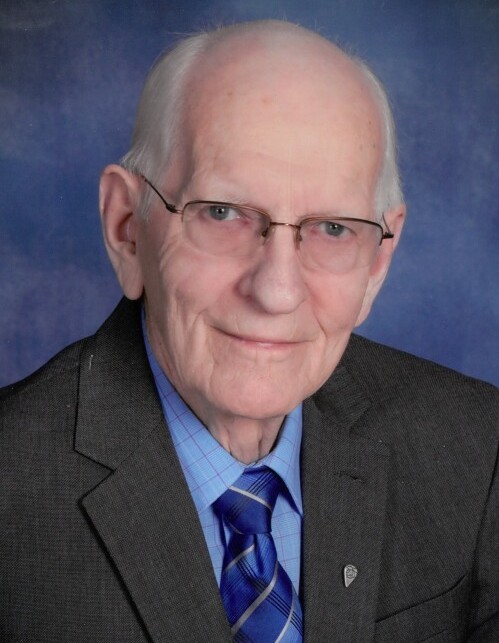 Wayne Harold Helgeson, age 94, of Austin passed away January 8, 2022, at Mayo Health Systems- Methodist Hospital in Rochester. Wayne was born on September 1, 1927, in Nevada Township, Mower County, MN, the third of four sons born to Ole K. and Clara (Hanson) Helgeson. Wayne was baptized and confirmed at Six Mile Grove Lutheran Church near Lyle, MN. When Wayne was an infant, the family moved to a farm in Lyle Township. He attended elementary school in the northwest corner of Lyle Township and graduated from Austin High School in 1945. After graduation, Wayne worked on the family farm until shortly after his 18th birthday when he enlisted in the United States Navy. Wayne completed basic training at Camp Perry, Virginia and was selected to attend Submarine School at the Naval Submarine School, New London, CT. After graduation he was assigned to the USS Plaice, SS 390, a submarine that had its home port in Pearl Harbor, Hawaii. It was on the submarine that Wayne earned his “Dolphins” as a qualified “Submariner” in the US Navy Submarine Service. Wayne’s enlistment ended in December 1947 with an honorable discharge. Since then, he has been a member of the VFW and since 1968, a member of the Lyle American Legion. Shortly after returning home from the military, Wayne worked for the Milwaukee Railroad as a fireman. He then began working for Hormel in Austin, MN and started dating Rose Madson, a girl he rode the school bus with. Rose and Wayne were married on August 21, 1949 at St. Olaf Lutheran Church in Austin. The Lord blessed this union with three children, Dennis, Elaine, and David. The Helgeson family farmed for several years in Hayward and Lyle townships. In 1960, the decision was made for Wayne to start a new career with the US Postal Service in Austin, where he retired in November of 1987. In 1968, the family moved to Lyle where the children were confirmed. While his two boys were scouts, Wayne served as the Lyle Boy Scout Troop Scoutmaster. Wayne was a devoted member of Our Savior’s Lutheran Church in Lyle and served as the church president. He also spent 15 years on the Lyle City Council, the last eight years as Mayor. While he was Mayor, he also served two terms as President of the Mower County League of Cities. After retiring from postal service, Wayne delivered 324 motor homes over a period of 12 years and started as a van driver for Lyle schools in 2006. Wayne was a member of the Lyle Volunteer Fire Department for 20 years, the Lyle Lions Club since 1968, where he served as President, board member, and Secretary since 2002. For over fifteen years, he was a volunteer with the Senior Nutrition and “Meals on Wheels” program.

Funeral service will be held at 1:00 p.m. on Saturday, January 15, 2022, at Our Savior’s Lutheran Church in Lyle, with visitation beginning at 11:30 a.m. Masks are recommended. Interment will be in Woodbury Cemetery, Lyle. Services are prearranged and performed by Worlein Funeral Home of Austin.

To order memorial trees or send flowers to the family in memory of Wayne Helgeson, please visit our flower store.