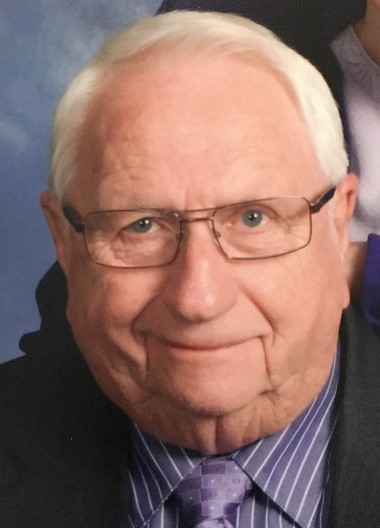 Mark Ernest Dennison, age 88, of Austin, Minnesota, passed away on Tuesday, January 4, 2022, at Mayo Clinic Hospital Rochester, Saint Marys Campus. Mark was born at home on the family farm in Dodge County, Minnesota to Ernest and Burdie (Amundson) Dennison on April 6, 1933. He graduated in 1951 from Hayfield High School and went on to receive his associate degree from Austin Junior College. As a young man, Mark worked milking cows. On June 11, 1953, he was drafted into the United States Army and spent his service in Alaska surveying airfields and worked at Wilson’s for a short time. While in the service, Mark earned the rank of Corporal and was honorably discharged on May 6, 1955. Following his discharge, he had a 37-year career with the U.S. Postal Service, where he started as a carrier and then became a clerk. Following Mark’s retirement in 1990, he worked part-time for 13 years delivering prescriptions for Austin Drug, where he enjoyed meeting so many people. On July 24, 1955, he was united in marriage to Jeanette Kruger at the First Congregational Church in Austin. Their union was blessed with four children. He belonged to the American Legion Post 91, the Eagle’s Club, and was a charter member of the Austin Youth Hockey Arena Drive. He was also a past president of Grace Lutheran Church and served on the finance committee. Mark enjoyed fishing, taking bus trips, and did beautiful stained-glass work. He loved traveling the U.S. including trips to Cape Cod and the Grand Canyon. Mark will be greatly missed by all his friends and family

A memorial service will be held at 11:00 a.m. on Wednesday, January 19, 2022, at Grace Lutheran Church in Austin. Visitation will take place one hour prior to the service. Private family interment will be in Oakwood Cemetery, Austin. Masks and social distancing will be required at the services. In lieu of flowers, the family requests memorials to Grace Lutheran Church, Austin. Services are prearranged and performed by Worlein Funeral Home of Austin.

To order memorial trees or send flowers to the family in memory of Mark Dennison, please visit our flower store.